Deep Travel Workshops has created a winter tradition: a January writing retreat in Mexico with Tim Cahill—perfecto! Tim is known for his numerous global adventures and books (see his bio at the end of this post), but he is also an engaging and encouraging instructor. He knows how to pull stories from anyone and anything, and he does it with humor and savvy. We invite you join Tim by the sea to write, to laugh, and to diligently research the best margarita con sal en la rocas. In anticipation of the workshop, we asked Tim several questions. From borrowed shorts to octopus, he’s true-to-form fun:

AN INTERVIEW WITH TIM CAHILL

Deep Travel: If you lost your luggage on a trip, what are the first things you’d replace?

Tim Cahill: Well, it would depend on the climate and my assignment. I carry my necessary meds, toothbrush etc. on the plane with me, along with my notebooks and pens. My bags were once lost in Namibia and I borrowed a pair of shorts and bought a few t-shirts. I was wearing proper trekking shoes on the plane, so I was OK. The fellow I borrowed the shorts from wanted them back, but I reminded him that we had been trekking in a sweltering desert for 10 days, that there had been no chance to bathe and that I never took those shorts off. Not once. He said, “consider them my gift to you.”

DT: What advice would you give to yourself when you first started writing?

TC: I would tell myself, “you are going to have to re-write. Don’t worry about being perfect on the first draft.” Re-writing is easier than “blank page” writing, so just get some stuff down. You don’t have to start at the beginning. Preferably start with the stuff you know you want to write.

DT: What is your favorite travel souvenir—tangible or intangible?

TC: My favorite souvenirs are really my notes. Sometimes, for an assignment, I’ve had to revisit a place I’ve been to simply using my notes. At first, it seems difficult, but after a time, it all comes back. The sights, the sounds, the emotions. Now, occasionally, I look over my notes for no other reason than to revisit a place I wrote about 30 years ago.

DT: What excites you about returning to Yelapa?

TC: I enjoy the small town atmosphere of Yelapa. The food is good (I like octopus and we don’t get a lot of that in Montana.) I like our group and realize that we are all somewhat on vacation, so I try not to let the sessions get too intense. The idea is to learn some valuable techniques but have fun doing it. And having done this group a year ago, I have some ideas about how to make it even better. (Also, I get to play with my first-grade level Spanish). 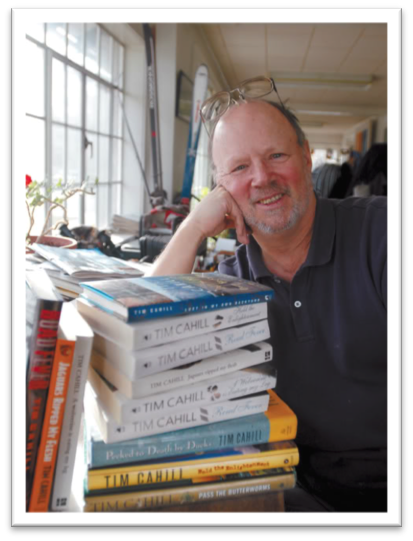 Tim Cahill is a founding editor of Outside Magazine. His work has been published in Esquire, Rolling Stone, National Geographic Traveler, The New York Times Book Review and many other national magazines. He is the author of nine books, one of which (Jaguars Ripped My Flesh) National Geographic named as one of the 100 best adventure travel books ever written. Cahill has won numerous awards, including the Society of American Travel Writers Lowell Thomas Award and the National Magazine Award. He is the co-author of four IMAX documentaries, two of which were nominated for Academy Awards. Cahill lives in Montana, in the shadow of the Crazy Mountains.

Join Deep Travel Workshops with Tim Cahill January 7-13 on the balmy shores of the Bay of Banderas. Register here.

For information on this or our other trips, click here.

Want to know about upcoming trips?